A small village in Spain, a community, an architectonic experiment
In the seventies a German Art teacher bought a mountain in Spain. Then he invited his friends to join and they started building a village. He had left his hometown, West Berlin, a while ago; seeking space and freedom to shape his life after his ideas.
Within the video a discourse between images, words, facts, and fiction is unravelled.  Questions are surfacing: “Is it possible to create a piece of reality based on naivety, freedom, and spontaneity?  Is this reality sustainable?  Is it worth trying to create a thing like that at all?”
The work can be seen as an optimistic look back into the past.  Showing the ambition of a group of West German artists influenced by revolutionary student movements of 1968.
(commissioned 2011 by Collective Gallery Edinburgh )

The making of the video was supported by:
Collective Gallery Edinburgh
Göthe Institute, Glasgow 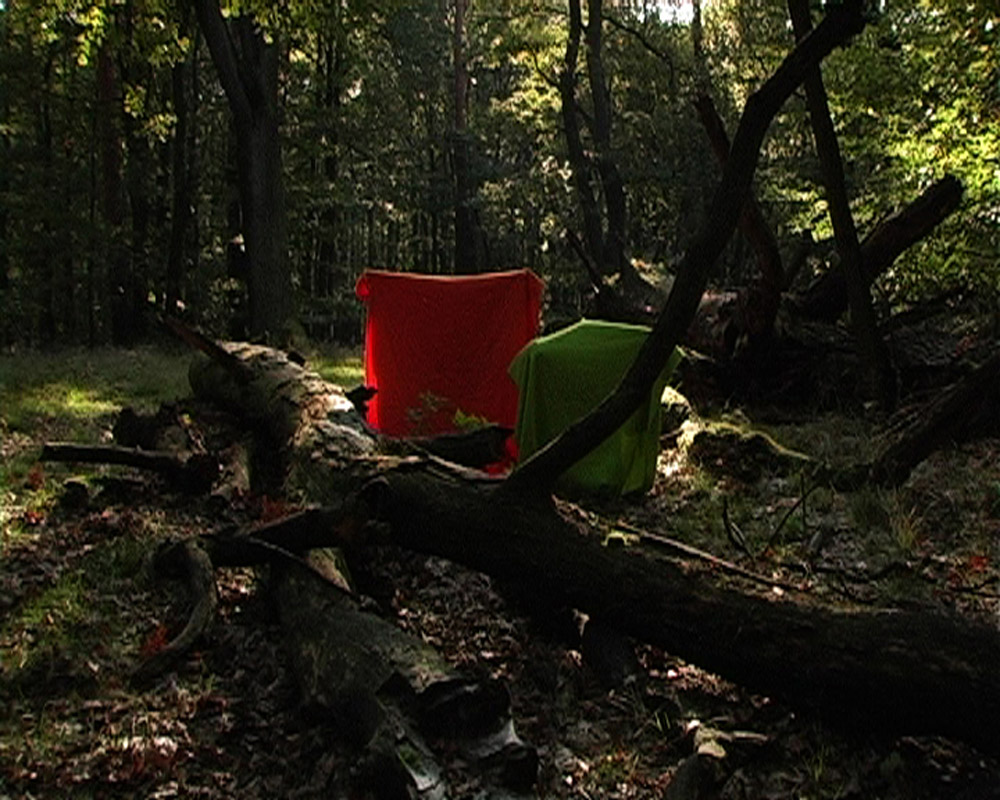 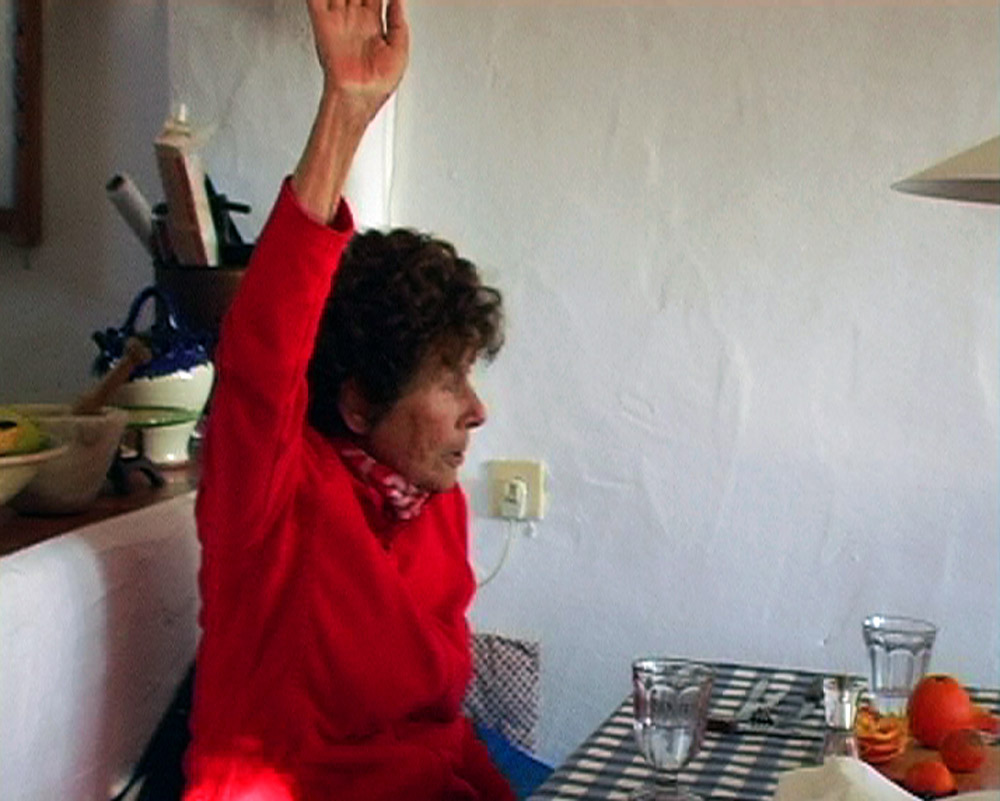 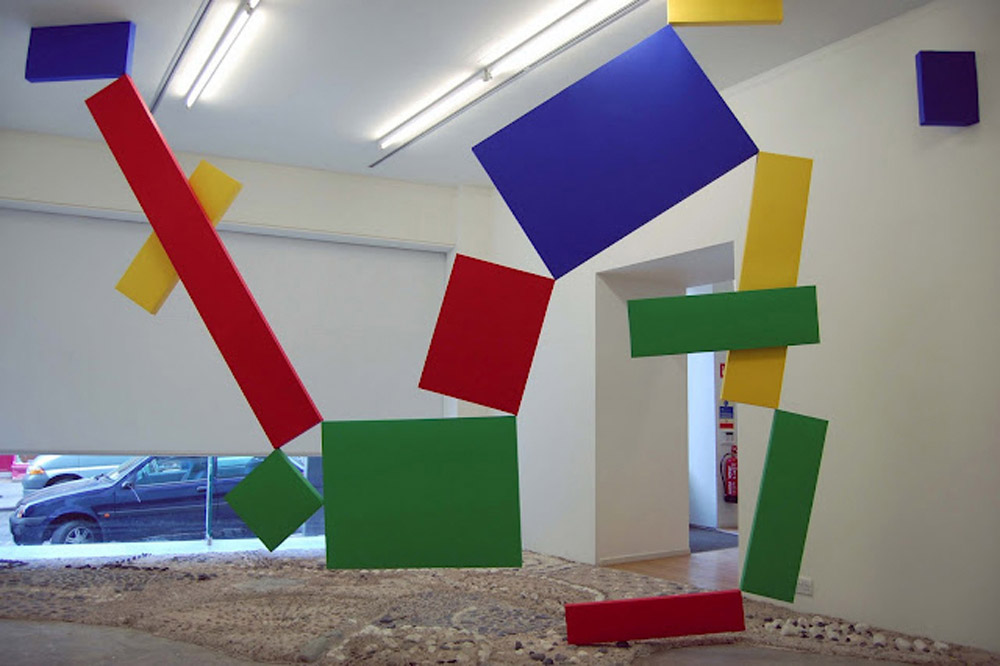 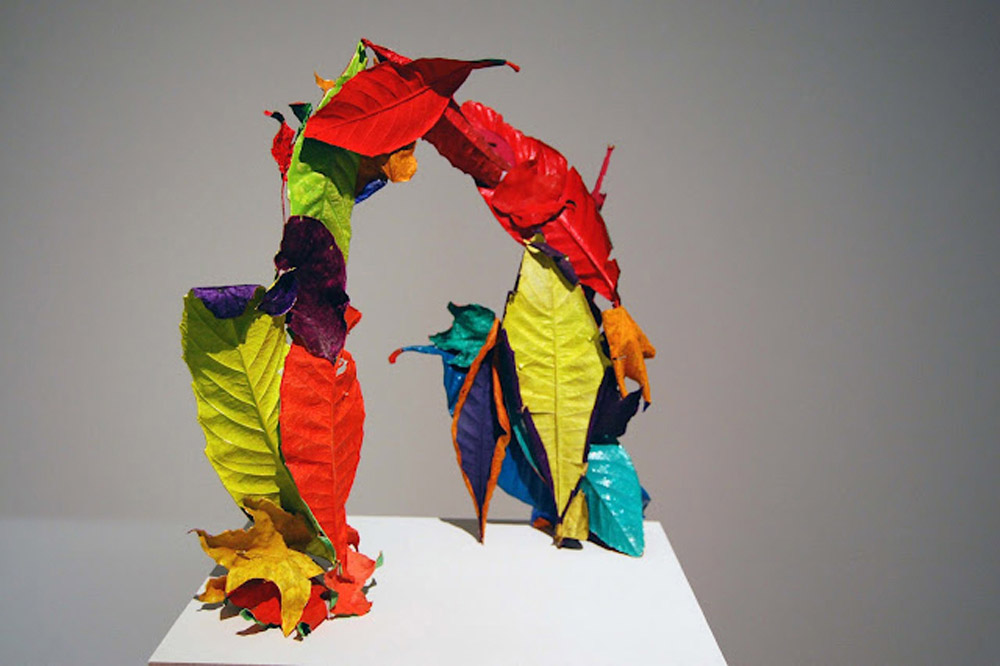 Farbenlehre, an exhibition by Alex Gross and Anna Mields.

“On a hill overlooking the Ligurian coast, A… J… has now slightly modified a few old houses and is building a garden to link all of them together.”

If this sounds like the type of fantasy familiar from any number of TV property shows – Escape to the Country; Property Ladder, Grand Designs, A Place in the Sun – or some lascivious Sunday supplement spread, that fantasy is just the current incarnation of a long established bourgeois idyll. And it is symptomatic of the times that such an idyll assumes utopia to itself: in individuals deprived of presumptions and metanarratives, idylls and utopias are fudged together for picturesque appeal – the idyll is permanently deferred and the utopia recalled as a middle class Oblivion washed in golden light and warm beer, a chimeric comforter as Things Get Worse.

The A… J… in question was Asger Jorn and the sentence has been excerpted from “On Wild Architecture” written by Guy Debord in 1974 to accompany a publication about Jorn’s garden at Albisola. “What more peaceful commentary could there be?” comments Debord. Despite the role of Liguria – Cosico di Arrosica – in the inception of the Situationist International, the relation-ship of the S.I. to rurality and “nature” is complicated and under-theorised, (despite the volume of research and polemic connected with the S.I.), not least because, as Debord comments in the text, “It is well known that initially the situationists wanted at the very least to build cities.”  The Situationist strategies for producing space and their insistence on spontaneity were deliberately gauged to interfere with the behavioural strictures imposed upon people in “rational” cities. “Chance” is nature mediated by the city, by science: if Situationist architecture is “wild”, it is because it is human.

Le Corbousier, against whose Modernist ideals Situationist theory might be pitchedi, was inspired by the vernacular of Mediterranean villages – not unlike Cosico di Arrosica or Albisola, not unlike our contemporary bourgeois idyll. He was particularly attracted to their whitewash, which stood, for him, as evidence of “harmonious culture”, preserved since time immemorial under an insulating layer of white. Corbousier’s “Law of Ripolin”, (Ripolin is the French equivalent of Dulux), articulated the essence of his architectural philosophy. White walls were crucial to the realization of International Style architecture to the extent that, of the twenty one buildings “exhibited” at the Weissenhofsiedlung in 1927, (an estate which set the agenda for architectural Modernism), all but two of the entries were white. In Modernism, the white wall aspires to operate transhistorically and transgeographically as the pure expression of a transcendentally appropriate architecture.

Perhaps understanding the intertwining relationship between the Situationist and Modernist can be meaningfully progressed using the figure of the Cynic, Diogenes of Sinope, as key. Diogenes lived in Athens where he made his home in a barrel (best described a huge, cynlindrical, earthenware tub or pot). From his barrel, Diogenes sardonically punctured the complacency of indulgent and fatuous Athenian citizens, rolling it back and forth in an imitation of useful work, taking leave of it to search the sunny agora for an honest man, lighted lamp in hand. If Diogenes’ behaviour might be seen to have an affinity with Situationist strategies of detournement and provocation, for Courbosier and the Modernists, Diogenes’ barrel – “The primordial cell of the house” ii -was paradigmmatic. The inherent profligacy of Diogenes as a person seems contrapuntual to the asceticism of his dwelling.

Ascetcism is expressed literally and metaphorically as nudity in Modernism and it is nudity – with its connotations of health and hygiene, muscularity and clean living – rather than (vulnerable, sexualised, errant) nakedness: Diogenes’ barrel might be “nude”, the man himself is naked. As the white wall represented an opportunity for Corbousier to refer to an unbroken inheritance of folk harmony in his buildings, so the European enthusiasm for naturism in the early 20th century was a purified recovery of ancient (Greek) culture, which modernism viewed as having been desecrated by successive centuries (a desecration accelerated by the Industrial Revolution). The rise of naturism is linked to the spread of modernist ideals. Corbousier’s veneration of whitewashed vernacular architecture santitised and disregarded anything decadent, discordant or unpleasant in the vernacular culture that gave rise to it. Whitewash symbolized the vernacular ideal; ornament – clashing colours and overlaid patterns (a tattoo’d body) – symbolized the degeneration of that ideal. Coloured and patterned walls encouraged “accretions of dead things from the past” wrote Corbousier, they were “intolerable” and “staining”. For some Modernists, (“Romantic” modernists), methods of mass manufacture led to the production of cheap, gaudily coloured kitsch – still born artefacts which accreted sentimentally in domestic corners, in front of papered walls. Whilst Situationists like Jorn were opposed to the dictats of capitalism, (inextricably linked to industrialisation), they were not opposed to “mass production” per se, finding room for human play and contraversion of purpose in the use and cherishing of mass produced objects. Modernist rationalism, which moved to expunge kitsch, was much more in tune with the capitalist imperatives of convenience and predictability. Debord thought Jorn’s garden on a hill above Albisola
“responds to even the concrete question of our appropriation of space, demonstrating that everyone could undertake to reconstruct around themselves the earth, which badly needs it. The painted and sculpted sections, the never-regular stairs between the different levels of ground, the trees, the added elements, a cistern, vines, the most varied sorts of always welcome debris, all thrown together in a perfect disorder, compose on of the most complicated and, ultimately, on of the best unified landscapes that one can traverse in the space of a fraction of a hectare.”iii

In the gallery – as Brian O’Doherty argues in his seminal text “Inside the White Cube: The Ideology of the Gallery Space” – the white wall consecrates the space. It is not a blank canvas or a tabula rasa. Although, for O’Doherty, the development of the “white cube” follows the development of easel painting, the gallery’s whiteness is as much a consequence of the success of Corbousier’s “Law of Ripolin” . There is a symbiotic relationship between gallery architecture and artworks in terms of their general planning and production, as well as in terms of their co-existence for the duration of an individual exhibition. Any art shown in a white cube space necessarily enters a dialogue with the “Law of Ripolin”. Where art accepts and trades upon the lessons of Modernism, that dialogue is mired in formalism, convenient and predictable. Where it challenges and disrupts those lessons, it moves to stain and randomize the gallery space, to stretch and play off the “Law of Ripolin”, “welcome debris” foregrounding human activity – emotional, complicated, imperfect.

Nickoluas Pesvner thought “Corbousier’s houses can’t please in decay. Concrete structures with walls designed to be rendered white make bad ruins.”iv  White – which must be clean according to the “Law of Ripolin” –  does not stand up to weathering by the elements or by people.

Fiona Jardine is a PhD researcher at the University of Wolverhampton.